Series 800 PCB magazines in use at Endress+Hauser 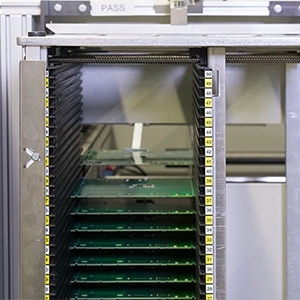 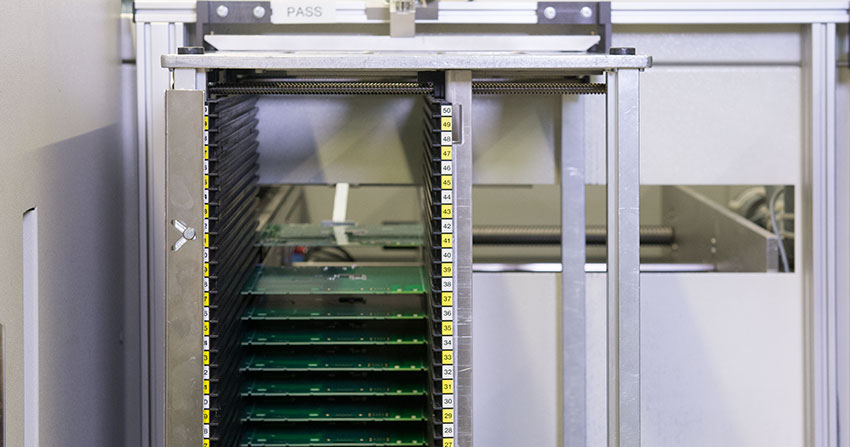 Endress+Hauser Wetzer is the largest company in Nesselwang, a resort well-known for skiing and hiking. Here, 363 employees mainly develop and produce devices for temperature measurement. The site emerged as a result of the takeover of a traditional local company by the Endress+Hauser Group. We have arranged to meet Mr. Harald Kraus, head of electronic manufacturing, and Mr. Gundolf Lippold, responsible for technical application in the SMD area. During our visit in the Allgäu we are especially interested in the PCB magazines that are in use in the automated assembly lines.

In the production lines PCBs are assembled with THT and SMD components. At the end of the process, each assembled board is once more automatically optically inspected for quality assurance. According to Mr. Lippold, within the last twelve months around 700,000 electronic flat modules have been produced at Endress+Hauser Wetzer. Approximately 90 million components have been processed on PCBs of various widths. 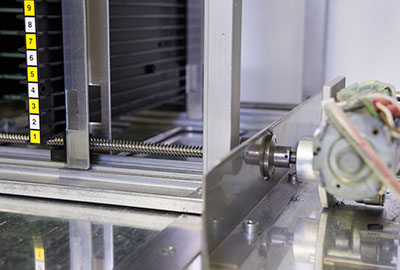 Precision, stability and flexible handling are important features for the use of the PCB Magazines in automated assembly lines. The rack walls of cab magazines are manufactured from conductive material. The stable and robust frame construction guarantees a long lasting use in production areas.

In case of different PCB sizes, the magazines have to be constantly adjusted to the PCB width. cab is the only manufacturer to offer PCB magazines where after put on a loader the moveable rack wall adjusts fully automatically.

Its operation is as simple as it is functional: There is a coupling wheel attached on one of the lower threaded spindles resistant to rotation. The second part of the coupling is mounted on the loader‘s separate servo motor. When the magazine is put in the loader a contact is triggered and both halves of the coupling connect. At first the moveable rack wall moves to a defined reference point. Then it adjusts to the width of the feeding conveyor belt. It is not necessary to provide a bunch of pre-adjusted magazines. Also, the insertion of incorrectly adjusted magazines is avoided. For Endress+Hauser this means higher process reliability.

Asked about the main demands on the magazines, Mr. Lippold states process reliability, added by robustness and stability as well as flexible application. With regard to production capacity utilization, both the loading and unloading of the lines with PCBs must run errorfree. Moreover, the weight should be little and edges not be too sharp so that the employees can carry the magazines without any risk.

Flexible application? We want to know more about that. “Here in Nesselwang we run a mixture of different PCB sizes”, Mr. Kraus tells us. “Our goal was to simplify the settings.” So it was decided to have the series 800 magazines introduced that can be integrated in all running processes. “Because of the automatic adjustment”, Mr. Lippoldadds, “we do not need to worry about the width setting. The boards are safely inserted from the line in the magazine. We are really satisfied with the magazines.” 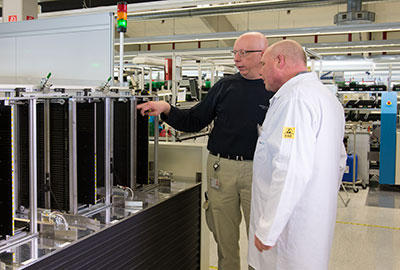 Pictured: Gundolf Lippold (left) and cab consultant Siegfried Schindele in front of an assembly line with a triple loader

PCB magazines by cab are in use at Endress+Hauser Wetzer since 16 years: in the electronics manufacturing, as intermediate buffer in production control and for the storage of the electronic flat modules

Series 800 PCB magazines in use at Endress+Hauser Wetzer

Do you have questions to this application?