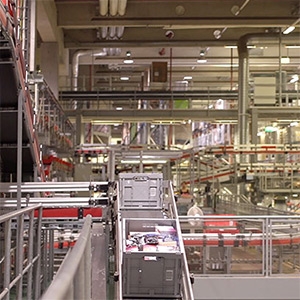 „In terms of technical expertise we felt at home with cab from the beginning“, says Klaus-Dieter Schrader. He adds that „we appreciated to have been informed also about the possible risks associated with the application.“ Mr. Schrader is Head of Systems Engineering at the central warehouse of ROSSMANN in Landsberg, East Germany. In this impressive several thousand square meters hall complex cosmetic and further products are picked into 18,500 boxes: 24 hours a day, in three shifts. The boxes are transported on conveyor belts to the target work stations - occasionally at a lofty height! We are delighted that Mr. Schrader and Mrs. Vivian Kaiser from the ROSSMANN Project Management take their time for us, especially to have a closer look at the labeling of hazardous goods with Hermes+ systems. 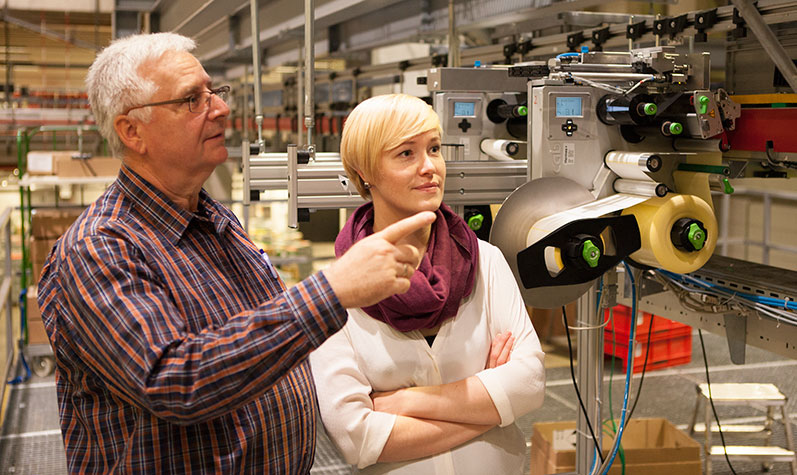 There are currently five cab Hermes+ print and apply systems in use along the conveyor system. Equipped with stroke applicators of the 4016 series, the Hermes+ devices apply limited quantity labels, in short LQ labels, to the picking boxes as specified in regulations. According to Mr. Schrader this is processed with a quality rate higher than 99 percent. However, the situation looked different just few months ago.

All this sounds complex and is tricky indeed. As usual with manual processes, it can never be excluded that labels are not or incorrectly stuck. In case of controls on the road this can lead to penalties. In order to avoid such danger it was decided to automate the LQ labeling at ROSSMANN‘s central warehouse.

The main requirement was to find a place where all boxes go through and where the labeling stations could be set up and installed. In Landsberg there are several order picking areas. When the order picking is finished the boxes get a transit declaration and are allocated to the target work stations. There they are manually removed from the conveyor system and packed on mobile rollboxes ready for delivery.

It was not possible to have the LQ marking right on the shipping label because the transported item can be either a single picking box or an entire rollbox. Therefore the labeling has to be done after transit declaration out of the order picking system. A 100 percent availability of automatic labeling was demanded as all boxes that need to have a LQ label must actually get one. 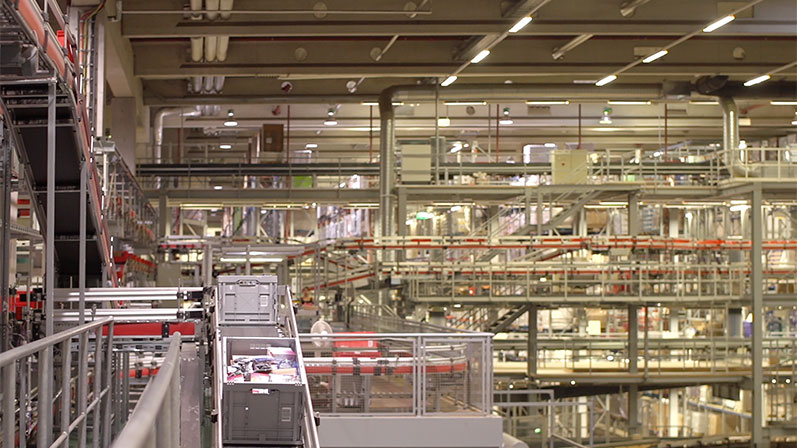 In Landsberg all 19,000 items of the ROSSMANN range of products are provided. The items are stored, removed from stock and relocated and finally delivered reliably and quickly.

Competence is the decisive factor

Mr. Schrader confirms to our inquiry that while searching for a proper system a common path was quickly found with cab. Already during preparation and planning competent contact persons have been made available on the part of cab. Thus, details regarding the technical realization could be clarified at an early stage and open questions could be resolved.

An example: Instead of labeling the boxes in motion it was decided to rebuild the current conveyor system so that the boxes are stopped by a blocking flap when they arrive at the labeling station. The labeling itself is done by a tamp pad smoothly pressing the label to the box. After that the conveyor belt accelerates and further transports the box.

„Our first priority to cab was“, says Mr. Schrader, „to provide us with a redundant print and apply system consisting of devices that are highly available. A system that for us means a minimum of maintenance efforts and makes the printers available for us from the first label to the last.“

ROSSMANN is Germany‘s second largest drugstore chain. As regards total turnover, the company is one of the ten most important food retailers nationwide. The central warehouse in Landsberg in Saxony-Anhalt is unique in Germany. From this location 249 of altogether 1,900 ROSSMANN sales outlets in Germany and six regional warehouses are supplied. Around 1,000 employees make sure that every day the whole logistic chain is covered, i.e. the incoming goods department, order picking and outgoing goods department, added by the transport of the goods with the fleet of vehicles to the outlet stores.

The system is running

The entire technology of the Hermes+ labeling stations was jointly developed with cab step by step. It was then put in operation by ROSSMANN. Since kick-off on August, 3, 2015, within three months time more than three million labels have been applied to the picking boxes. 99.9 percent of all boxes that have to be marked are attained. There are no more maintenance efforts for the ROSSMANN employees than to exchange the label and ribbon materials. On this occasion, the employees also have a closer look at the devices. 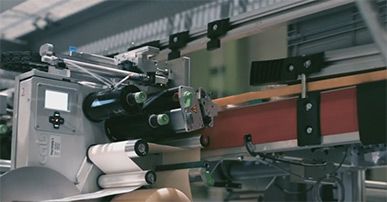 Print and apply system Hermes+ in operation at our customer ROSSMANN.