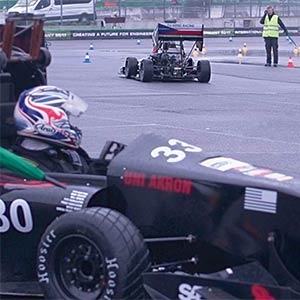 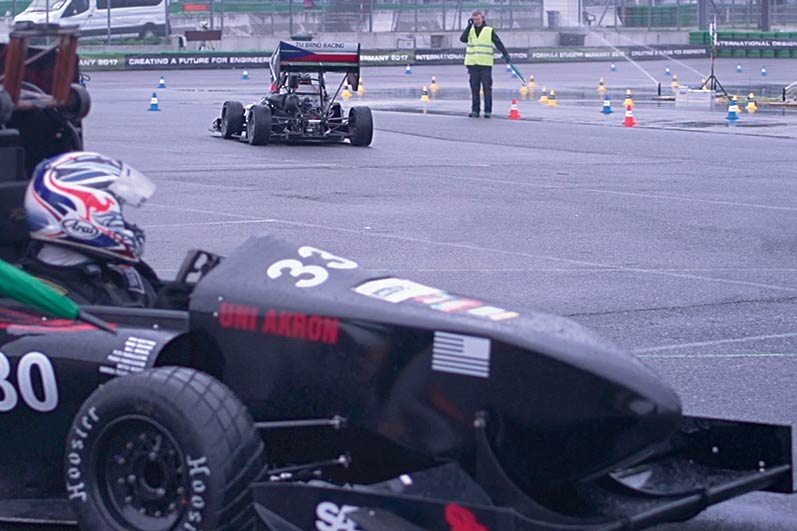 We paid a visit to the Hockenheimring. Since 2006, more than 100 student teams from over 20 countries annually meet in the paddock for six days to present single-seated formulastyle race cars for which they had to this point spent time engineering and screwing. At the Formula Student Germany competition, in short FSG, the best overall packages consisting of design, racing performance, financial and business planning are awarded.

Behind the scenes there is a lot of activity, too. The Event Manager Daniel Mazur and his team commit a lot of efforts and passion throughout the year to make processes at the FSG further dynamic and professional for all participants. For the 2017 event, it had been decided to simplify the volunteer identification on site. So, for the first time in the history of the event, name tags made of acetate silk were provided to attach to the workwear. As regards the marking, cab had customer-specifically configured a printer model SQUIX.

Textile printing is a specifity

Name tags made of acetate silk reliably stick on clothing and can be detached without any residues left. The surface structure of the fabric suites for thermal transfer printing. Nonetheless, special treatment is required.

cab is experienced with printing on textile tapes as well as on slim continuous materials such as shrinked tubes. The successful A+ series already offered printer types to be used both for classic paper and plastic labels and special materials. The XD4T printer model even prints on these materials double-sided in one operation. cab usually delivers textile printers of the current SQUIX series with a centred material guide and a separator. During printing, the latter separates the material from the ribbon. After printing, a brush discharges the electrostatic charge. 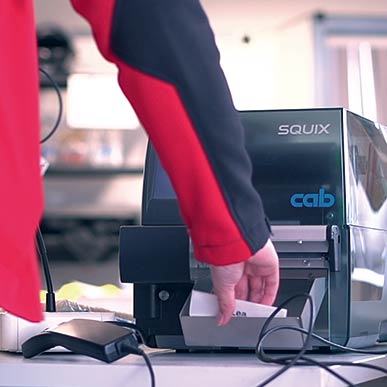 Automatic cutting after printout
In the tray a maximum of 50 labels can be collected.

The decision to provide name tags at the FSG had been made at short notice. About two weeks prior to the event, Fabian Liesch, who has been in charge of the IT at the FSG, had little time to identify a supplier and a printer suitable to manage the acetate silk application. Contacting a cab competitor had been unsuccessful. So Fabian Liesch, who had grown up in Thuringia and mainly works in Zwickau, decided to have a closer look in the regional surrounding and called at the cab production facility in Sömmerda. There he was told the name of the responsible cab field worker, who shortly after contacted Fabian Liesch.

All printing requirements were evaluated. As the basic source for the label data, a MySQL database including all volunteers had been set up by the FSG event board. Daniel Mazur and Fabian Liesch intended to call these data on a laptop and have it printed on the label by the connected printer. As regards printing, material waste in the form of blank labels between the print jobs had to be avoided. Return feed of the material from the cutting edge to the print head is not permitted with SQUIX standard textile printers, as they basically process continuous materials. Thus, cab decided for a basic SQUIX 4 device with 300 dpi print resolution, an additional antistatic brush and a cutter to separate the labels after printing. The separated labels were ejected in a collection box mounted to the printer.

”It is far from self-evident to get all this managed in such a short time“, a very satisfied Fabian Liesch told us. Daniel Mazur considered the strong commitment the key factor for the successful realization of the print application. He moreover discovered parallels in the approach of both parties: ”We immediately could see developer spirit and enthusiasm in your considerations. This is very much in line with the way we are working, as things quite frequently have to be realized at short notice.“ 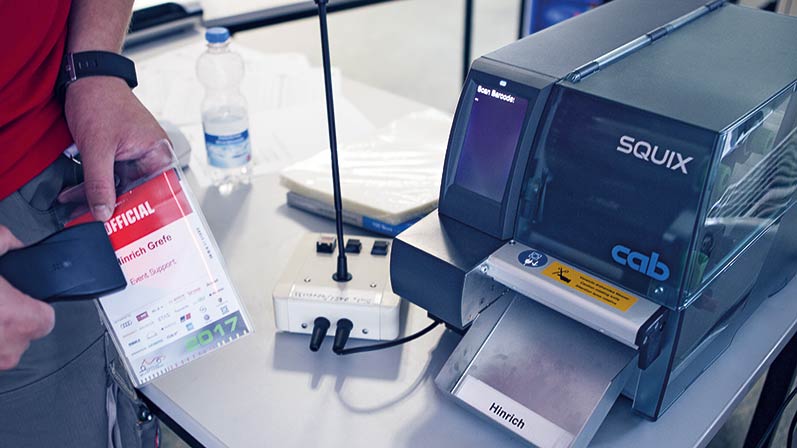 After printing had been initiated, the SQUIX has within a second printed the first line on the label.
The interaction of an intelligent firmware, a lean programming language and a highly performant CPU is devisive.

In addition to the hardware, cab impressed with the possibility to print in stand-alone mode without a host system. ”We had not thought of this in the beginning, but it clearly made things easier for us“, says Fabian Liesch. In stand-alone print mode, the label is designed either with a label software or a text editor on a PC. Label formats, texts and graphics can be stored on a memory card or memory stick, database contents can be read directly. In case of FSG, the MySQL database had been converted to a CSV text file as the source of supply for the label data, and transferred to a USB stick for reasons of data protection. To identify the employee, the alphanumeric Code 128 on the lanyard was scanned on site. An abc programming developed by cab especially for this application assigned to the printing system which data to read from the CSV file on the basis of the scanned code and to prepare for printing.

Label printing had been running perfectly throughout the event. Inspired by the volunteers‘ positive feedback, name tags were also printed for the jurors. As for next year, it is planned to adapt the system in favor of easier visitors‘ access. Also sponsoring partners plan to have their own name tags in 2018. They indicated that proper apps are already in preparation. 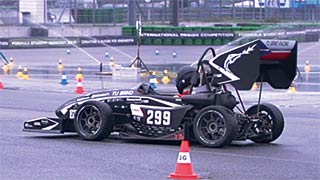 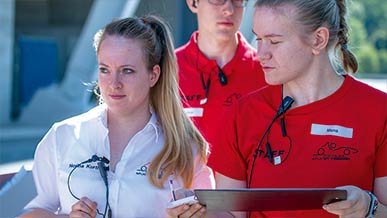 Video of this application