To control the printer with a software other than cablabel S3, cab provides drivers in 32 / 64 bit for operating systems starting from Windows Vista, Mac OS 10.6 and Linux with CUPS 1.2.

Windows1) drivers
cab printer drivers are certified according to WHQL. They ensure optimum stability on the Windows operating system.

JScript
To control the printer cab has developed the embedded programming language JScript. Download a short introduction or the complete programming manuals for free:

abc Basic Compiler
In addition to JScript and as an integral part of the firmware it allows advanced printer programming before data are sent to printout. For example, external printer languages can be replaced without interfering in the current print job. Also data from other systems such as a scale, a barcode scanner or PLC can be integrated.

Printer Vendor Programm
As a partner in SAP's4) Printer Vendor Program cab has developed a replace method to enable easy control of a cab printer via SAPScript from SAP R/3. Only variable data are sent to the printer by the host. Pictures and fonts that priorly had been stored in the local memory (IFFS, memory card, etc.) are merged.    Integration of cab label printers in SAP systems

Configuration in Intranet and Internet
The HTTP and FTP server integrated in the printer via standard programs like a web browser or FTP clients allows printer control and configuration, firmware updates and memory card administration.

Via email or SNMP, the SNMP or SMTP client datagram sends status, warning and error messages to administrators and users. Time and date are synchronized by a time server. 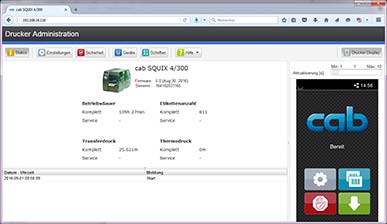 Network Manager
It is possible to simultaneously manage several printers within the network. Control, configuration, firmware updates, memory card administration, data synchronization and PIN administration are supported from one single location. Ready for A+ and X series, Hermes+, Hermes C and PX.

Database Connector
Printers connected to a network may directly access data from a central ODBC- or OLEDB-ready database and print it on a label. While printing, data can be rewritten to the database.

This operating mode is the printer's ability to select and print labels even when it is not connected to a host system.

The label has to be designed with a software such as cablabel S3 or by direct programming with a text editor on a PC. Label formats, texts, graphics as well as database contents are saved or read on a memory card, a USB memory stick or the internal IFFS storage.

Only variable data are sent to the printer via a keyboard, barcode scanner, weighing or other systems and/or recalled from the host with the Database Connector and printed. 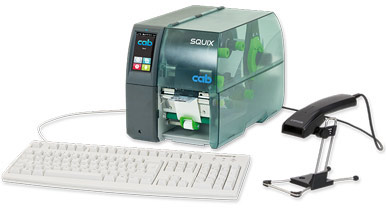