Insights into the labeling of battery packaging

Dischingen looks tranquil: 1,700 residents, with meadows and forest all around. Here, amid the eastern part of Germany‘s Swabian Alb region, VARTA Consumer Batteries GmbH & Co. KGaA (since 2002 part of US Spectrum Brands Holdings) produces more than a billion round cells each year. After they got labeled, packed and palletized they are leaving Dischingen in trucks. All over the world, the battery sizes AA, AAA, C and D are used in mobile phones, cameras, flashlights, remote controls, toys and many more. As regards the labeling of the small energy carriers‘ packaging the company since 2014 relies on cab tools and solutions.

Batteries are merchandise. At their packaging the EAN128 barcode is demanded. In this, for example the product ID or a sender‘s global identification number, lot resp. batch numbers, dates or numbers of quantity may be displayed. As the EAN128 is the basis for evident traceability of goods, its data structure needs to be clearly legible resp. identifiable.

420 employees are working at VARTA in Dischingen

Further "hard facts" in the context of VARTA package labeling are:

Before 2014, the company‘s package labeling had been executed by means of a self-contained system. Hardware, software and labels had been provided by one provider.

In the meantime the printers' electronics got outdated. Recent printer models would not have been supported by the existing software and electronics that would have been necessary for refitting the existent printers was partly no longer available. „All in all it made sense“, states Planning Engineer Jörg Unfried, "to think beyond and redefine our package labeling". That is: For the upcoming operational hardware design one invited proposals from various manufacturers.

"With cab we immediately felt that they sell with competence. We have met with Sales Representatives who are able to disassemble and reassemble a printer themselves. That has been very well received by all of us."
Jörg Unfried, Planning Engineer, VARTA Consumer Batteries 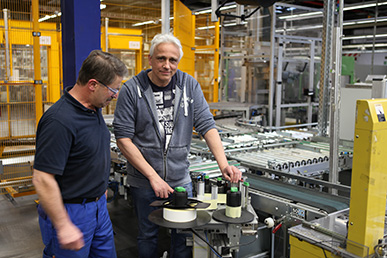 „Here we had the best impression on cab“, says Unfried. By now, the whole automated packaging in Dischingen is equipped with cab Hermes+ print and apply work stations. A4+ desktop printers are used where foil packagings are manually packed in cardboard boxes and finally labeled. Furthermore there is a hand packing station with a cab label dispenser.

Each Hermes+ system is provided with a vacuum belt applicator 5314. The printed label is moved to the labeling position via vacuum belt where it is applied sidewise to the packaging via external signal. While dispensing the next label can simultaneously be printed. Particularly important: The speed of the production line is independent of the labeling. This had not been possible using a "classic" dispensing function. 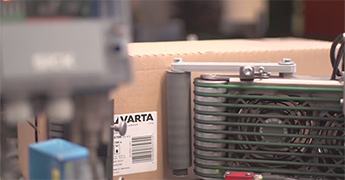