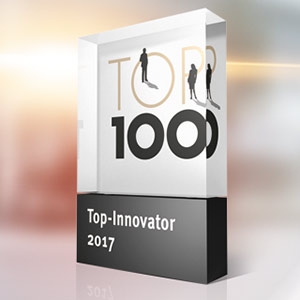 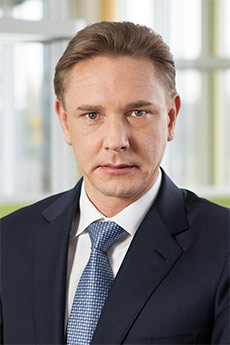 "Our customers confirm the high qualitiy of cab devices and technical staff, that is unique in the industry."

cab belongs to the top of the German SME sector. We have just been awarded with the TOP 100 seal. In the 24th edition of this nationwide, independent contest, cab proved outstanding particularly with its management promoting new ideas, consistent know-how and innovative success.

"For us, innovation means gaining market shares and further pulling ahead of the competitors", says cab Manager Director Alexander Bardutzky. In addition to product innovation, relevant issues are the integration of new ideas and concepts in organization, workforce deployment and management. Due to professional specialization in the top management, quality is kept at a high level. Since 2009, Alexander and Klaus Bardutzky share the management of the company. The company founder Klaus Bardutzky is primarily in charge of the development of the label printers, dispensers, print and apply and marking laser systems, his son Alexander is responsible for the marketing and sales of the products, administration and human resources. cab considers innovative development an open project, based on mutual exchange, individual and team work.

Setting the benchmark
Around 60 per cent of cab management’s working time is dedicated to the innovation of the products. One reason to participate in TOP 100 was to see the standing of cab in comparison with other innovators all over Germany. "As regards innovation management, TOP 100 is the most renowned contest in this country", says Alexander Bardutzky. "To see us among the awarded companies in our first participation is a nice confirmation for us.  It shows that we are right with our innovative strategy."

cab’s aim is to act at an early stage rather than just reacting. Preconditions are market proximity and the search for little or fully unspoiled ways instead of sticking to the saturated. Amongst others, cab had been a pioneer with label printing in stand-alone operation. When the worldwide GHS system for consistent classification and labeling of chemicals was introduced, cab printers of the XC series were the first to allow customers print with two colors on a label in one operation. Long before Advanced Manufacturing became synonymous with the interconnection of production and modern ICT, the architecture of cab printers had been designed with regard to device intelligence and complex possibilities for data exchange. The excellence of the devices is confirmed by the figures: Almost 90 per cent of the customers steadily rely on products made by cab, some of them for more than 20 years.

The contest
Since 1993, the TOP 100 seal labels SMEs to be especially innovative and exceptionally successful in the innovation sector. According to the initiator, more than 4,000 companies asked for the qualification questionnaires in the 2017 competition. 305 companies were in the finals, the best 262 companies have been awarded.

cab has more than 40 years of professional experience and technological expertise.

Get to know us

The award for Germany's most innovative SMEs.